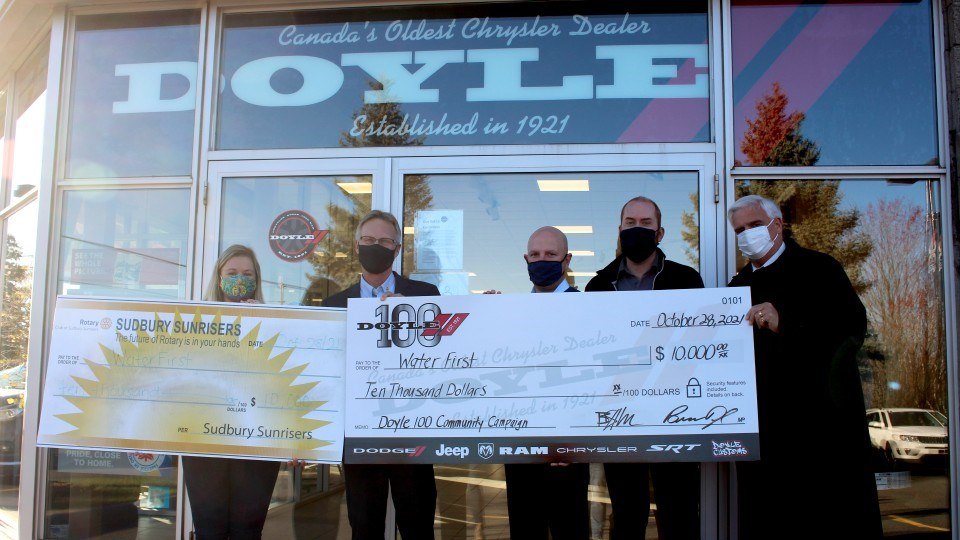 This article originally appeared on Sudbury.com.

A non-profit organization called Water First that helps to address water challenges in Indigenous communities in Canada through training has received a $20,000 boost from Sudbury benefactors.

Rotary International District 7010, which includes the Rotary Club of Sudbury Sunrisers, has been working with Water First to facilitate donations.

At the same time, the Doyle Dodge car dealership here in Sudbury has been running a charitable project, the Doyle 100 Community Campaign, as part of its 100th anniversary celebrations.

Each month, Doyle Dodge receives nominations through a dedicated website for deserving charities in the running to receive a $10,000 donation. If you would like to vote for your favourite charity, you can do so here.

The September winner of the $10,000 Doyle Dodge donation — as put forward by the Rotary Club of Sudbury Sunrisers — was Water First.

The Lougheed Foundation decided to match that $10,000 donation to Water First, meaning the organization is receiving a $20,000 donation.

“We live in Canada, which is a wonderful country, but there’s still many areas that don’t have clean, reliable sources of drinking water,” she said.

“That’s both a technology issue in terms of having a plant that’s able to do that, but it’s also about having qualified individuals to run that plant and keep them in those communities.”

Kenrick-Rochon said Rotary clubs in the district have partnered with Water First to provide funding for the program’s next training intake.

The $20,000 donation to the program “has been a great initiative with Rotary to partner with other community providers to provide support, both with Doyle Dodge and their 100th anniversary with the radio competition that was in place, as well as we were able to match that with the Lougheed Foundation as well,” she said.

“We’ve had excellent response from Rotary clubs throughout our district,” he said. “We’re confident that because of the efforts of people like Doyle Dodge and the radio station and the local Sudbury Sunrisers, we will meet or exceed our target.”

He said if individuals wish to donate to Water First, they can do so through the Rotary Club of Barrie, which has set up a Canada Helps site for donations.

“Any donations that are made by individuals will automatically receive a tax receipt, and they’ll also qualify for matching funds from our District and from Rotary International,” Meadley said.

Blake Didone, general manager and co-owner of Doyle Dodge, said because the Sudbury community has given the dealership 100 years of support, it decided to step up its community efforts in honour of its anniversary.

He said the dealership expects to distribute $130,000 in donations to various charities by the end of the year.

Doyle Dodge has received many applications from deserving charities, but Water First “in particular is a very important organization and project because obviously there is a need there,” Didone said.

“Just like anything we support, we’re glad that the money is going to a good cause… And good for the Rotary Club of Sudbury Sunrisers for getting behind it. We’re happy we could get behind it as well.”

Geoffrey Lougheed said the Lougheed Foundation is proud of taking part in such a worthy cause.

“It’s great to see the money go to such a worthy cause, and wonderful to have our Rotary Clubs always doing such good work in our community and around the world,” he said. “Water is a necessity. The fact that this project deals with one of the necessities is fabulous. And it really means that we’re starting to see priorities go where they need to go.”