Sudbury’s Doyle Dodge: The Next Generation 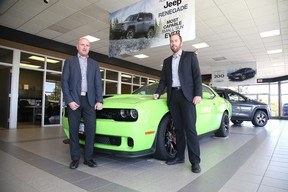 This article originally appeared in the Sudbury Star.

Mike Doyle, who bought the dealership in 1986, retired this summer. Stepping in as new owners are Mike's son Brian and Blake Didone.

"(We bring) a lot of energy," Brian said. "We're both younger guys, we've been in this for about 10 years, we have a lot of experience considering our age. And we both enjoy our job and we enjoy being in the public and we get a thrill of selling a car."

"It's something I'm really proud of and certainly appreciative of," Didone said. "This is the oldest Chrysler dealership (in Canada), and I was excited to be invited and part of this. It's something I've worked hard for."

Doyle, 32, grew up in the family business, taking small jobs from the time he was 18.

Didone, 35, was brought in along with Doyle, officially in 2007, to bring youth into the store. It was a new direction for the dealership, and now Brian and Blake are taking over.

"Brian grew up in this, and this is his family business," Didone said. "I've been a (vehicle) guy since I was 2."

Didone said he believes the duo bring a fresh outlook and a welcoming enthusiasm.

"We have about 50 staff," Didone said. "And we're so proud of the group. We interact, we don't feel like employees. It's like a family. We're not looked at as figure heads, we're looked at as pieces of the puzzle."

The youth movement at the dealership is well underway, according to Doyle.

"The Ram truck got redesigned a few years back and it's been an amazing revelation for the dealership," Doyle said. "We're No. 1 in overall sales this year, and as far as direction, we get involved in the community with advertising companies, we go to festivals, we were at the Fall Festival, we did Rib Fest before, and hitting the streets and talking to people has made a difference.

"Our service staff, the average age has gone down, as well, which is a benefit because cars are now (full of electronics), so if a guy who has been at this for 30 years ... well, good on him if they have been able to keep up, but the younger (people) have a better advantage."

On Saturday, the sixth annual Mopar Show & Shine will be hosted by the dealership, located at 2555 Regent St.